February 3, 2019 - Come, follow us in the snow. Who says all this snow can't be fun? If you can't make it go away, you might as well enjoy it! Sister Spear enjoying a little snowshoeing in the North Country snow. (Yes, we do get some free time!!!)

Visiting Gail
We stopped in to visit a member in Ft Covington - a small town on the outskirts of the branch just across the border from Canada. Only the wife is a member. Her husband was also a member before he passed away. She is not actively attending the branch at this time. She shared that she actually preaches once a month in the Zion Church in Canada. She was very friendly and gracious and we had a wonderful visit. We could see that someone loved and collected old radios. Elder Spear had his picture taken by a couple of black face Zenith radios that are about 80 years old - very sought after models. Notice the green "eye" on the bottom radio, it gets brighter as you more closely tune the radio to the channel. Both radios still work. The husband shared that he still has the radio that his dad listened to the infamous radio broadcast by HG Wells: "The War of the Worlds." For those too young to remember, this is the broadcast the simulated a news broadcast that was reporting Earth had been invaded by the Martians. After hearing the shocking "news of the invasion", his 13 year old dad ran down to the grange where his parents were gathered with friends. His dad burst in and shouted that the world had been invaded by Martians. For years all of the family friends would ask if their family had seen any Martians recently.

In addition the family had a "studio prop" suit of armor. (Meaning that it is not an actual suit of armor, but looks good as a background piece for a movie.) The Sisters wanted to get a shot of the armor with their beautiful smiling faces. We get in a lot more doors when we have the Sisters with us – who can say no to them?

Branch Callings
I guess the "vacation" is officially over - as Member, Leader, Support Missionaries, we also hold Branch callings. Elder Spear was called as first counselor in the Elder's Quorum Presidency with the additional assignment of training the President and other counselor. He was also called as an Assistant Branch Clerk which aids our efforts in having access to membership records so we can search out and visit the Branch members and also to help us locate and move out records for any members that no longer live in the area.

Sister Spear has been called as a counselor in the Young Women's Presidency and as a Sunday School teacher. She has also already substituted as Branch organist.

The District has also asked us both to serve in the Home Study Seminary Program. It doesn't appear that the Seminary program will exactly follow all the guidelines - the main focus will be teaching a weekly lesson after Mutual on Wednesdays.

A little history of the town & village of Massena - if you're going to live here or follow our blog, you should know a little bit about it:

Massena is a town in St. Lawrence County, New York, United States. Massena is located along the northern border of the county, just south of the St. Lawrence River and the Three Nations Crossing of the Canada–United States border. The population was 12,883 at the 2010 census. The town of Massena contains a village also named Massena.

Massena was one of the first towns settled in St. Lawrence county, but was not incorporated until 1802. The town and its village are named after André Masséna, a general and Marshal to Napoleon during the Napoleonic Wars.

Up until the 1880s, the town was predominantly agricultural, mainly home to butter and cheese production. Aside from the dairy farmers (and the blacksmiths, craftsmen, and shopkeepers that serviced them), the town boasted the Massena Springs, a pair of sulfur springs––one hot and the other cold––reputed to possess healing powers known to the Native Americans before European settlement. In 1820, an Army veteran, Captain John Polley––hoping to capitalize on these properties––opened a hotel and began to advertise them. By 1858, three hotels, numerous rental cottages, a bathing house, and a plant that bottled and sold the spring water, had been built. By about 1900, the Springs' status as a popular resort had faded.

The first small mills were built in the 1830s, harnessing the Grasse River to turn their wheels. They included a saw mill, stone-cutter, and a tannery. In 1833, New York State Legislature approved a canal that would bypass a troublesome rapids hindering navigation on the St. Lawrence by linking the Grasse and St. Lawrence Rivers. However, the British Empire preempted this project by building the Cornwall Canal on the Canadian side of the River, completed in 1843. The Massena Canal project was revived at the end of the century and completed in 1898.

The modern town is involved in power production, aluminum production at ALCOA, and the commerce of the St. Lawrence Seaway. Massena's economy has suffered for the past few decades due to its large exposure to American manufacturing and the automotive industry. The town is home to an Alcoa Aluminum plant, the longest continually operating aluminum facility in the world. Alcoa currently employs over 600 people at its facilities in Massena.

Massena is a beautiful place which happens to be all white right now! We were leaving Branch President Chapman's home and wanted to share a beautiful sunset at dusk.

Evelyn Miller's Conversion Story
When we first met Evelyn, we asked her to share her conversion story.
Evelyn said that when she was about 13 years old, she was crazy about teen idol, Donny Osmond which was also her first introduction to Mormons. (Members of the Church of Jesus Christ of Latter-day Saints.)

A few years later she enrolled in college but was not very dedicated to her studies her first semester. The school suggested that she take some time off and decide what she really wanted to do with her life. While taking a semester off, she ran across a Reader’s Digest magazine that had an article about the Mormon Tabernacle Choir. (The Tabernacle Choir at Temple Square.) She read the article and became quite interested in the church. She wrote a letter to the church which said: Please tell me about your beliefs.

She simply put it in an envelope and addressed it to:
The Church of Jesus Christ of Latter-day Saints
Salt Lake City, Utah

She mailed the letter and a few weeks later, she received a letter from Carlos Assay who also included a couple of pamphlets. Evelyn thought that was great and read the pamphlets, but thought that would be the end of that. Of course, 2 missionaries showed up to her doorstep soon thereafter, taught her about the gospel of Jesus Christ and baptized her.

Come, Follow Me for Individuals & Families
Massena Branch President Chapman issued an invitation to the Branch:

“I feel strongly that each of us in the Massena Branch can deepen our conversion and become more like Jesus Christ by going beyond just reading the scriptures. I have asked our Senior Missionary Couple, Elder and Sister Spear to visit all Branch members to introduce the Church’s new gospel study resource: Come, Follow Me for Individuals and Families.  This resource is for every individual and family in the Church. It is designed to help us better learn the gospel— whether on our own or with our family. I invite each of you to make a more deliberate effort to study and learn the gospel by using this inspired resource.”

As we mentioned last week, Elder and Sister Spear have now begun to visit with the Branch Members and have been encouraging them to act upon President Chapman's invitation. We have had a wonderful time meeting with the members and teaching them about this new resource and then studying the current week's reading.

If you haven’t studied the gospel regularly in the past, now is the time to get started. If you already have a good habit of gospel study, now is the time to begin to find new ways to have an even more meaningful experience. Our message that we share as we visit:

The aim of all gospel learning is to deepen our conversion and help us become more like Jesus Christ. For this reason, when we study the gospel, we’re not just looking for new information; we need to draw close to our Savior, Jesus Christ, so He can change our hearts, our views, our actions, and our very natures.

Learning from the Savior starts when we strive to understand what He taught. With more focused gospel study using the new Come Follow Me program the door will open so we can be more inspired which can then lead us to change the way we live. We must listen to what the Spirit tells us as we read and then we must commit to act on these promptings which will better prepare us for the Second Coming of Jesus Christ by walking the covenant path.

The First Presidency says, “Living by and reading the word of God will build faith in Heavenly Father and His plan of salvation and in the Savior Jesus Christ and His Atonement.”

The Savior’s invitation, “Come, follow me,” applies to all—whether we are new on the path of discipleship or have walked it all our lives. We must all learn that being a disciple means giving our whole souls to Heavenly Father and Jesus Christ. We progress in our discipleship as we identify what we lack, strive to change, and then seek to more fully follow Heavenly Father and His Son, Jesus Christ.

The goal is to obtain a deep and lasting conversion of adults and the rising generation. The kind of gospel learning that strengthens our faith and leads to the miraculous change of conversion doesn’t happen all at once. This means relying on Christ to change our hearts.  It extends beyond a classroom into an individual’s heart and home. It requires consistent, daily efforts to understand and live the gospel. True conversion requires the influence of the Holy Ghost.

Wherever you are today in your gospel study, we invite you to make a more deliberate effort to study and learn the gospel by using this inspired resource.

Transfer Week:
And last but not least: It's our first transfer this week - we are hoping that we get to keep all of our wonderful, totally awesome missionaries. The Sister Missionaries convinced us that we needed to go to lunch, just in case one of them gets transferred. We think it was a very good ploy to get a free lunch!!!!

February 10, 2019 - Ice palaces in Saranac Lake, New York. The completed mighty fortress is always decked out with colorful flags and may contain ice furniture and sculptures along with tunnels and mazes. 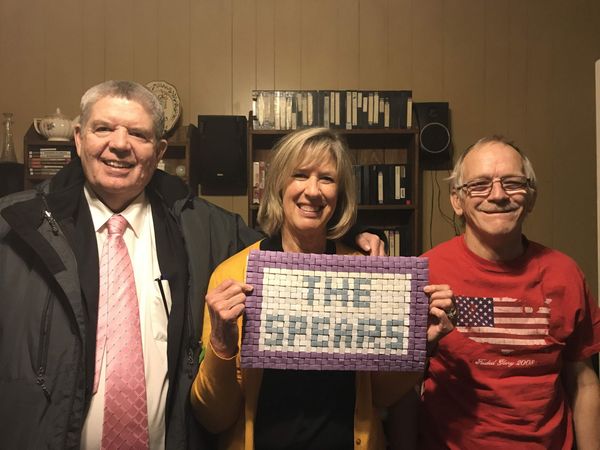 January 27, 2019 - Everett wanted us to feel welcome and loved, so he made a poster with our name on it by folding small gum wrapper sized papers.