February 24, 2019 - When Jesus invited the men who would become His Apostles: Come, follow me, and I will make you fishers of men,  they straightway left their nets, forsook all, and followed him. All who have accepted the call to lead in the Church have accepted the Savior’s invitation to become fishers of men. We are enjoying our "fishing trip" in the North Country of New York.

Well - we didn't really go fishing, but on our preparation day, we went to the Chateaugay Fish Hatchery just outside of Malone, NY which is where one of our North Country rural branches is located. They raise primarily brook, brown, and rainbow trout. One of the recent converts in the Massena Branch told us her brother used to work at the Hatchery and that it would be a good place to visit.

Monday was President’s Day and only one person was working at the Fish Hatchery. He told us his name was Ben and that he had been working there since December. He said that no one had stopped in to tour the Hatchery in the two months that he had been working. (Obviously, not one of the Top Ten Tourist Destinations in the North Country of New York.)

We told Ben that we were missionaries from the Church of Jesus Christ of Latter-day Saints. He pretty much gave us a blank look and said he had never heard of that church. So we told him that some people know as the Mormons. He said, OK, I’ve heard of the Mormons. He then gave us the tour.

When we got ready to leave, we told him now he could tell his co-workers and friends that someone actually came to see the Hatchery. He said, yeah - I can’t wait to tell them who came to my door: The Mormons!

We are having lots of fun being Fishers of Men - we spend our time working with wonderful Branch members - new and old - and helping the Sisters with their investigators.

Two of our Branch members, Rozane and Tim were married last Saturday - it was a nice ceremony with a beautiful bride and a handsome groom.

John and Mona Chapman are stalwart members of the Massena Branch. John is the Branch President and Mona is the Relief Society President - so you know they are busy at their house. John is retired (laughter in the background) - he's a farmer and we all know they never retire. Mona is a Speech Language Therapist. We have really enjoyed getting to know them.

Massena First United Methodist Church offers free dinner to the Community once a month on Thursday. The Elder's had been volunteering, but since they left, the Sisters are taking over and they invited us. They had about 50 people - the numbers are smaller in the winter because of the snowy and icy weather. Karen helped wash dishes and I scraped the trays and then sent the dirty dishes in the dumb waiter to the basement to the dishwashers!

This week we have been visiting the less actives and inviting them to the Winter Luau that we have planned for this coming Friday. If they weren't home, we scotch taped the invitation to their front door. Our most interesting visit was to a home that actually invited us in. The wife who is a member of the church was there with her husband who is not a member. After chatting for a few minutes, I asked her how long had it been since she'd been to church? She gave me an angry little look and declared, "I was in church last Sunday!" I knew that I had not seen her in church, but then it dawned on me - she had been to church - she just didn't attend our church!!! So, I said, I guess I didn't phrase that right...How long has it been since you have been to the Church of Jesus Christ of Latter-day Saints? She said she had never attended that church and was not a member. We asked if she didn't remember getting baptized and she said yes, in the Catholic Church - but she had never been baptized in the Mormon Church. She even gave us her birthdate so we could check it out. After we left, we checked it out and we had her full name, birthdate and address right...so we'll see what she says when we go back.

What a joy it has been to be able to dedicate our lives to serving the Lord. We are richly blessed. 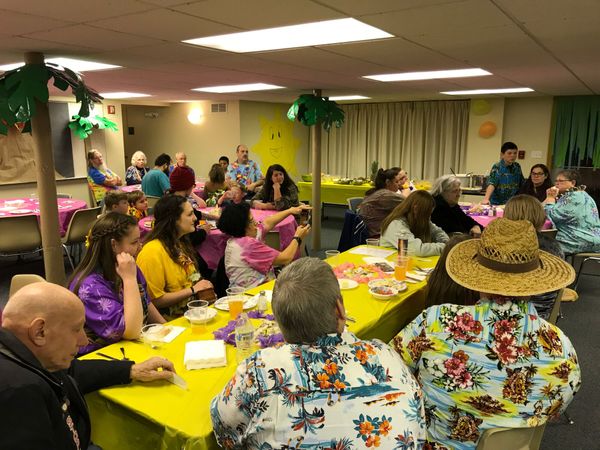 March 3, 2019 - The Massena Branch escaped the doldrums of winter and enjoyed a Winter Luau this last week...complete with palm trees, a volcano, grass, the sun and the sea! 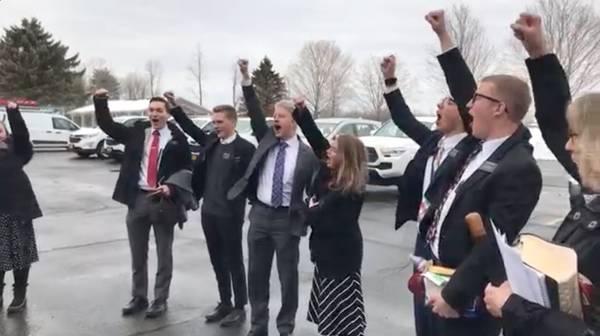 February 17, 2019 - Like Brigham Young & Heber C Kimball, the missionaries in the New York Utica Mission continue to show through their obedience and hard work that they too are willing to make any sacrifice asked of them to build the kingdom of God.