February 17, 2019 - Brigham Young and Heber C Kimball were called to serve a mission in England. Both were seriously ill. Their wives and children were also very sick. When it was time for them to leave, it was with difficulty that Brigham & Heber got into the wagon, and started down the hill about ten rods. Brother Kimball relates: It appeared to me as though my very inmost parts would melt within me at leaving my family in such a condition, as it were almost in the arms of death. I felt as though I could not endure it. I asked the teamster to stop, and said to Brother Brigham, “This is pretty tough, isn’t it; let’s rise up and give them a cheer.” We arose, and swinging our hats three times over our heads, shouted: “Hurrah, hurrah for Israel.”

Truly Brigham Young and Heber C Kimball were willing to make any sacrifice asked of them to build the kingdom of God. They were laying up “treasures in heaven, where neither moth nor rust doth corrupt”.

Likewise the missionaries in the New York Utica Mission continue to show through their obedience and hard work that they too are willing to make any sacrifice asked of them to build the kingdom of God.

Twice a month the singles join together for FHE on Monday night. Donna (in the wheel chair) can't get out any more, so the singles come to her and meet at her assisted care facility. Lots of food and fun.

We had an interesting visit with Chana. When we offered to share a message about the Come, Follow Me resource, she said, "Well, you know I haven't been coming to church since Trump won the election and I found out that 61% of the members of the church voted for him. (Not sure where that statistic came from.) And you do know I'm Jewish don't you? The answer to that question was no, we weren't aware of that. While we didn't have a discussion on Come, Follow Me, we had a stimulating conversation about other things. We had a nice visit and Chana said she'd love to have us over for dinner to which we agreed.
Chana has a beautiful home on an incredible 10 acre setting right on the Grass River.

It seems to snow, freeze, have a nice 45 degree day and then plunge to 15 below. It certainly plays havoc with the driveways - when the snow melts and the temperature drops like it rock - it all turns to pure ice! Walmart was out of ice melt this week!

Dick and Janet have been stalwarts in the Massena Branch for about 45 years. Wow - they have done a lot of everything! They have blessed the lives of hundreds and hundreds of members and missionaries through all those years. We enjoyed a Come, Follow Me discussion about the New Testament. Dick has really embraced this new church resource.

One of the branch members told us how they used to strap on their skates and ice skate across all of the farms in the winters.

We had an enjoyable visit with Carol and Pepper. Sadly, Carol's husband passed away just a month ago. We had another Come Follow Me discussion.

Karen and I have spent parts of several days training to be volunteers with Hospice. We saw an ad in the local newspaper that said they had  great need for additional people in the Massena area. The main office is in Potsdam - about 25 miles from Massena. We had to drive down for the training. EVERYONE should take this training and become familiar with Hospice. It is a tremendous organization that does so much good with individuals and families with end of life counsel and treatment. Hospice was very helpful to both Karen's dad and my dad when they passed away.

The Nature Center where we volunteer once a week had Turtle Day this last Thursday. They split about fifty 4th graders in half with one group going outside and snowshoeing and the other group learning about turtles. And then they flip flopped. (Some of my grandkids look at this blog - the turtles are for them!!!!) 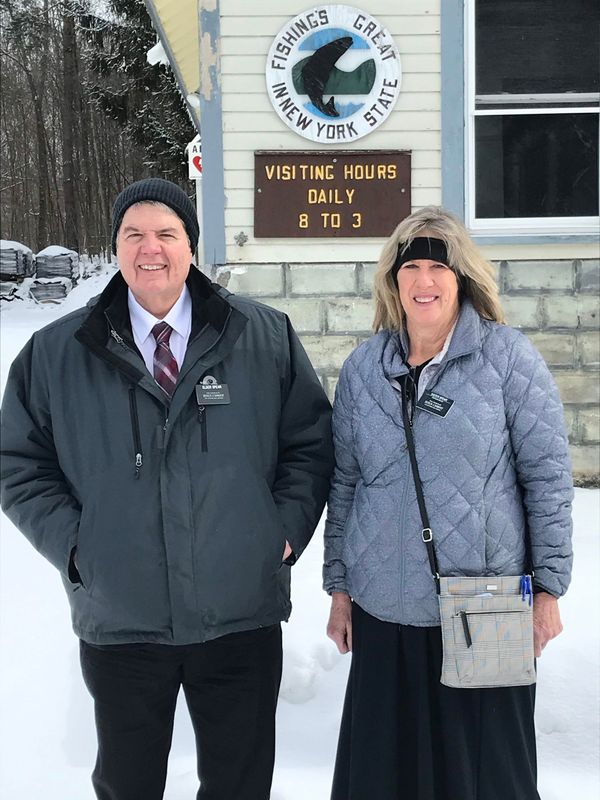 February 24, 2019 - When Jesus invited the men who would become His Apostles: Come, follow me, and I will make you fishers of men, they straightway left their nets, forsook all, and followed him. We are enjoying our "fishing trip" in the North Country of New York. 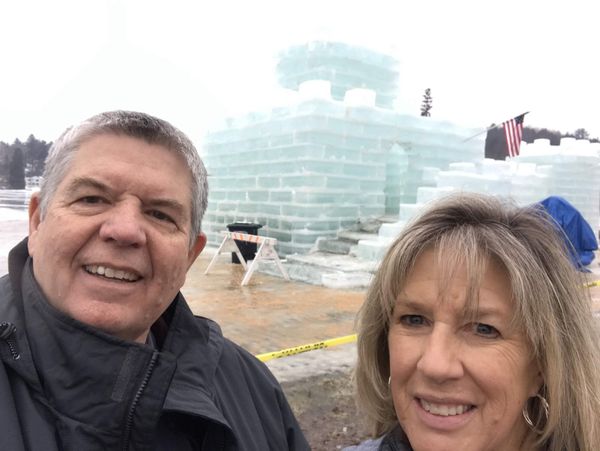 February 10, 2019 - Ice palaces in Saranac Lake, New York. The completed mighty fortress is always decked out with colorful flags and may contain ice furniture and sculptures along with tunnels and mazes.