April 21, 2019 - We had a marvelous trip to the Montreal Temple in Canada this week. We were able to take a recent convert, Karen to the Temple for her first time to do baptisms for the dead. John also came from the Massena Branch.

On the way to District Council in Potsdam, we kept passing a sign nailed to a tree: Bread on Wednesdays. We heard it was an Amish family that baked the bread, so we decided we had to stop and try the bread. They don't use electricity in their homes. They ride buggies instead of cars and pickup trucks. The lady's name was Amanda and she was sweet as can be, but they don't like to have their pictures taken, but she was okay with us taking pictures of ourselves.

Sister Fairbanks is related to Avard Fairbanks (March 2, 1897 – January 1, 1987) who was a prolific 20th-century American sculptor. Three of his sculptures are in the United States Capitol, two of them in National Statuary Hall and one in a corridor; seven other statues are placed in Washington, DC. The state capitols in Washington, North Dakota, Utah and Wyoming, as well as numerous other locations, also have his works. As a member of the Church of Jesus Christ of Latter-day Saints, Avard was commissioned to do several monuments for the Church: Joseph's First Vision, The Restoration of the Priesthoods, The Angel Moroni which tops the Washington D.C, Seattle, Jordan River, and Mexico City temples.

In 1975, about a year after Karen and I were married, we lived in the same Ward as Avard on the east bench of Salt Lake City - it was either the Yale or Yale 2nd Ward! We lived in the basement apartment of the smallest house in the Ward. (That means we were poor newly weds!!!)

Being a third generation car salesman, I have to include a little known fact about Avard's creative abilities. In 1929, rising young sculptor Avard T. Fairbanks arrived at the University of Michigan-Ann Arbor to head up the sculpture department. He needed a more reliable car than his 1928 Willys-Knight, which wouldn’t start on cold winter mornings, but in the Depression, he didn’t have money to get one.

Fairbanks reasoned he could design a radiator cap ornament in trade for a new automobile. Chrysler Corporation, in nearby Highland Park, was an up-and-coming auto maker, with innovative engineering and designs; but its radiator caps, with their little Viking wings, needed improvement. Avard Fairbanks was just the artist to replace them with sculptural masterpieces.
At Chrysler headquarters, he was told they were about to introduce an all-new Plymouth, the PA series, featuring Floating Power (which meant shock-absorbing engine mounts). “The Smoothness of an Eight with the Economy of a Four” was the advertising pitch. Could he symbolize that in a radiator cap ornament?
Fairbanks designed a little mermaid (of Norse mythology) coming up out of a swirling wave...then gave her the wings of an eagle. The mermaid was a hit: Floating Power, indeed!
In return for his work on the little mermaid, Fairbanks was paid with a handsome, red 1932 Chrysler Royal Eight.

The locals tell us that we can know when spring has arrived. When we hear the Northern Spring Peeper frogs croaking, spring is here. Only they say, "When the peepers are peeping!" The Nature Center had captured a peeper and had it a little glass box on the desk where we sit when we are there.

Listen to this short video of our little Peeper peeping!

Joel from the Nature Center took us outside and showed us one of the frog ponds. Listen to the chorus of peepers peeping and a grouse also making some noise.

The Nature Center had day camp this week since it was spring break - the kids could come enjoy a wide array of nature activities.

We had a wonderful time getting to know the other Senior Missionaries. We had a great discussion on Sister Becky Craven's April 2019 General Conference talk and came up with these points that stood out for us:
1. Am I careful or am I casual?
2. True happiness comes from exact, careful, intentional obedience.
3. There's not a right way to do the wrong thing.
4. We never lower our standards to make others feel comfortable. We elevate.
5. We consistently change and repent as needed.
The one I suggested didn't make the list but came close. We discussed the part of the vision of the Tree of Life, where the river of water represented the filthiness of the world. Sister Craven said the scriptures describe that this river “ran along” the path yet passed only “near” the tree, not to it. The world is laden with distractions that can deceive even the elect, causing them to be casual in living their covenants—thus leading them near the tree, but not to it. I suggested that the last one should have been:
6. Close only counts in horseshoes. (Although the full saying as I recollect is, close only counts in horseshoes, hand grenades and the front porch swing.)

Jeremy’s Egg
Jeremy Forrester was born with a twisted body and a slow mind. At 12 years old he was still in the 2nd grade. His teacher, Doris Miller, often became exasperated with him because he squirmed in his seat, was a distraction and made grunting noises. She tried to be sympathetic knowing he had a terminal illness. Doris was a Christian and she asked the Lord to help her be more patient with Jeremy.

Near Easter Doris told the story of Jesus, how he died on the cross for the sins of the world, how he rose from the dead, and the new life he offers to those who accept him. To emphasize the idea of new life springing forth, she gave each of the children a large plastic egg. “Now,” she said, “I want you to take the egg home and bring it back tomorrow with something inside that shows new life. She noticed that Jeremy looked at her intently and she wondered if he understood about Jesus’ death and resurrection. The next morning, her class of 19 children came and placed their eggs in the bag on Miss Miller’s desk. Finally, the time came to open the eggs. In the first egg, Doris found a flower. “Oh yes, a flower is certainly a sign of new life,” she said. The next egg contained a butterfly that looked real. “We all know that a caterpillar changes and grows into a beautiful butterfly. Yes, that’s new life, too.” Next, Doris found a rock with moss on it. She explained that moss, too, showed life.

Then Doris opened the 4th egg. The egg was empty. She knew it must be Jeremy’s and of course he didn’t understand the instructions. She put the egg aside and reached for another. All of a sudden, Jeremy spoke up. “Miss Miller, aren’t you going to talk about my egg?” Doris was flustered and she replied, “But Jeremy your egg is empty.” He looked at her and said, “Yes, but Jesus’ tomb was empty, too. When she could speak again, Doris asked him, “Do you know why the tomb was empty?” “Oh, yes, Jesus was killed and put in there. Then his father raised him up.” Doris realized Jeremy truly understood the message of Easter.

Three months later, Jeremy died. Those that went to his funeral were surprised to see 19 plastic eggs on top of his casket, all of them empty.

A few years ago, the Tabernacle Choir at Temple Square, invited singers everywhere to join in the world's largest virtual "Hallelujah" chorus by submitting videos of themselves singing along with the "Hallelujah" part of their choice (soprano, alto, tenor, bass). Videos of selected singers were featured in the final video with the Choir and Orchestra at Temple Square.

When completed, 300+ members of the Mormon Tabernacle Choir combined with over 2,000 voices worldwide in an incredible musical tribute to Jesus Christ.

We are so grateful for this Easter day. We testify that He Lives! The tomb was empty. Jesus Christ rose from the dead. He is our Savior, our Redeemer, the Risen Lord and everyone of the names sang in this beautiful rendition of Handel's Hallelujah Chorus. 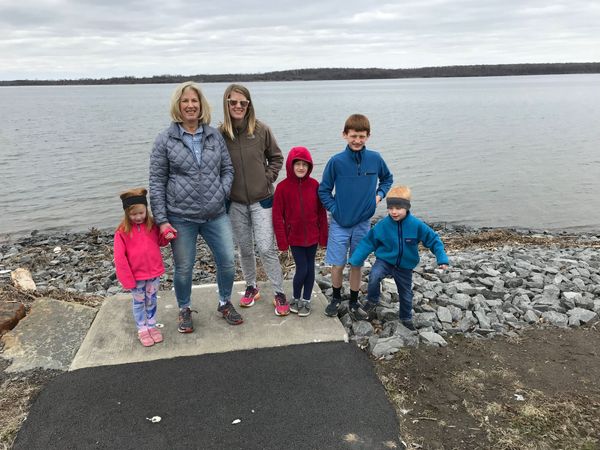 April 28, 2019 - Our daughter Jessy and her four kids who live near Albany, NY - Will, Lucy and twins Annie & Jack came for a short visit this week. They were greeted with one of Grammy's famous signs. We celebrate birthWEEKS at our house... 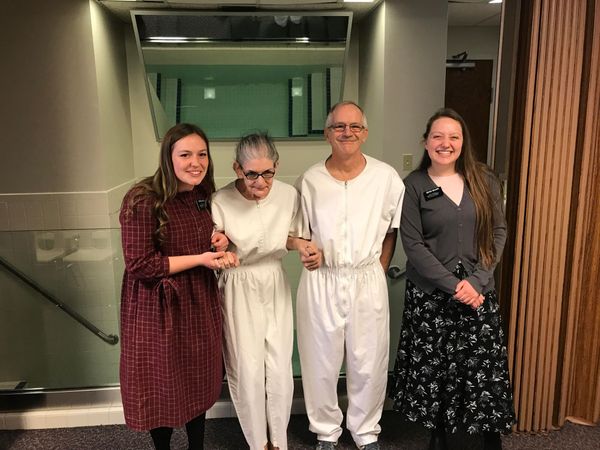 April 14, 2019 - Everette & Denise entered into the waters of baptism last Saturday. What a sweet, joyful experience. There was such a wonderful feeling of love and joy...