Our first stop was in Price to say goodbye to Murray, Jim and Jackie Shorts at the Heirloom Inn.  It brought back many memories of Mom who lived right across the hall from the Shorts.  We stayed only a “short” while (pun intended) and headed east.  We spent the 1st night in Grand Junction Colorado.

January 5th:  Today we drove through the beautiful Rocky Mountain past ski resorts and thru the Eisenhower Tunnel into Denver.  We planned to have lunch with Mark’s brother, cousin and aunt in Denver.  On the way down the hill from the Eisenhower tunnel the brakes on our newly purchased two-year-old car began to shimmy a lot!  As soon as we got into Lakewood Colorado we tried to find a Toyota dealership that could look at the brakes.  We called three different dealerships in the area with no luck.  So we began calling brake shops nearby.  We found one that could take us right away, took the car there, called “Lift” for a ride the Olive Garden where Mark’s family was meeting us and had a wonderful visit with David, Leslie, Aunt Pauline and Nicole and Avery.

When David took us back to the brake shop we only waited about 20 minutes for the car to be finished.  After a slight inconvenience and a not so slight payment we were again headed eastward. We spent the next night in North Platte, Nebraska.

January 6th: We drove 2 ½ hours to Aurora, Nebraska and attended Sacrament Meeting in a small branch.  We counted about 40 people in attendance.  Members of the branch told us that their branch boundaries were about 90 miles north to south and 45 miles east to west!  Wow!  They meet in a building that looked like a business office.  We went into the church through “Suite C”.  The members were super nice and friendly and invited to come back and talk when our mission was over.

We headed eastward again.  This was our longest driving day.  We had planned to stop a couple of hours before Chicago, but then thought we might hit rush hour traffic into Chicago the next morning, so decided to drive past Chicago.  We thought that Sunday night would be a perfect time to drive past Chicago.  Then Mark said, “it would be a perfect time, unless there is a game going on somewhere”.  What were the chances that the Chicago Bears are playing a wildcard game in Chicago that day?  The game ended when we were about 50 miles from Chicago.  Thank goodness we did not run into stop and go traffic, but we could see all the game traffic as we drove past the busiest part of town.   We stopped for the night in Gary, Indiana

January 7, 2019:  We stopped in Kirtland Ohio and visited the Church history sites there.  What a wonderful experience.  So much Church history took place in that area.  We truly felt we were walking on holy ground.

We were the only visitors there, so we had the movie theater to ourselves and the Sister Missionaries to ourselves (Sister  Arnold and Sister Lund).  We got to stand in the room of the school of the prophets and see the rooms where Joseph and Emma stayed above Newel K Whitney store.

The saints of this era sacrificed so much for the Church of Jesus Christ.  Newel K. Whitney and his wife financially and physically were such great contributors to the young struggling Church.

We also drove to the John Johnson farm.  Joseph and Emma also given a place to live in the Johnson home.  It is here were Joseph was dragged from his bed and tarred and feather and the next day gave his sermon from the front porch of the home.  We got to stand there.  We next sat in the room where Sydney Rigdon and Joseph saw The Father and The Son and received the revelation found in section 76th of the Doctrine and Covenants about the kingdoms of glory.  What an outpouring of the Spirit we could feel on this sacred ground.

We stopped in Erie, PA that night.  The wind was whipping and it was very cold in Erie.

Drove from Erie to Glennville, NY where we stayed the night and played with and hugged our New York grandchildren.  Will thought we were still going to New Zealand on our mission and were just stopping to say goodbye.   Annie saw my name tag and asked what it was.  I told her we were going on a mission for the Church of Jesus Christ of Latter-day Saints.  Annie said, “that’ not my church.  I go the  church with the benches. 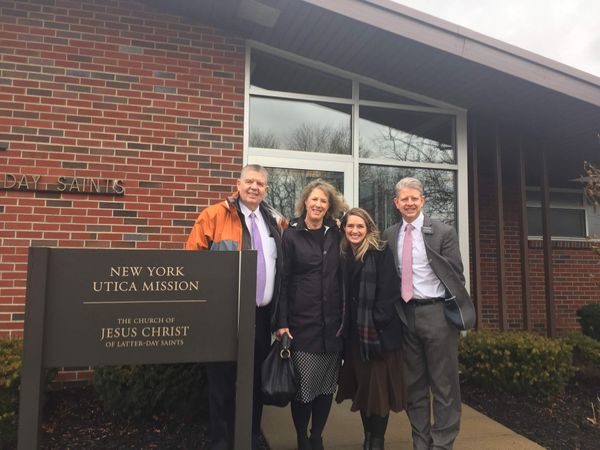 January 9, 2019 - We finally made it to Utica. We drove to the mission office and met Brother and Sister Haderlie (office missionaries) and Sister Boekweg (mission nurse) and President and Sister Vest. 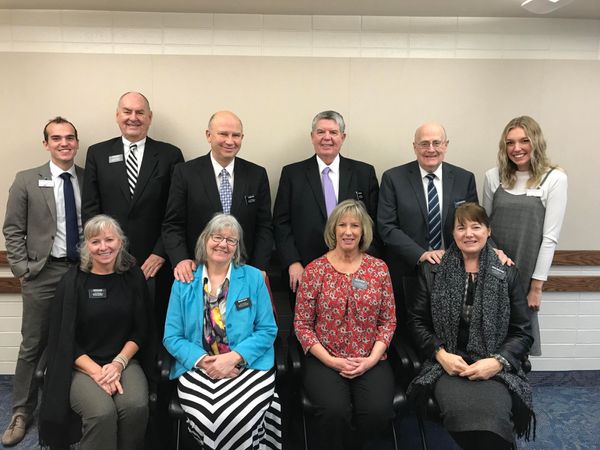 Dec 31, 2018 to January 4, 2019 - We Had 5 Wonderful Spirit-Filled Days at the MTC Our 1st full day at the MTC was wonderful, marvelous, a spiritual high and we are so excited to finally be with all the missionaries.

Mark and Karen Spear's Mission Blog
—
The Trek from the MTC in Provo, Utah to Our Mission in Utica, New York
Share this