A person outside the U.S. seeking refuge. The U.S., based on international law, defines “refugee” as a person outside the country of his or her nationality, who is unable or unwilling to return to that country because of persecution or a well-founded fear of persecution based on his or her race, religion, nationality, membership in a particular social group, or political opinion.

The legal basis for humanitarian admissions of refugees and asylum seekers to the United States began with the Refugee Act of 1980, which defined a refugee, established the Reception and Placement (R&P) program for initial resettlement under the U.S. Department of State, and created the Office of Refugee Resettlement (ORR) under the Department of Health and Human Services (HHS).

Who determines the number of refugee admissions?

What is the refugee limit for fiscal year 2019?

30,000. Although historically the U.S. has resettled more refugees than any other country, its resettlement program has not kept up with increase of the global refugee population that has increased by about 50 percent over the past five years.

While there were approximately 19.9 million refugees worldwide as of fiscal year (FY) 2017, the U.S. currently resettles just a small fraction of them. Less than 1 percent of the total number of displaced people on the world has been resettled to one of 37 current resettlement countries each year. In FY 2016, the U.S. admitted nearly 85,000 refugees, a number that declined to fewer than 54,000 refugees in FY 2017, the lowest number in a decade after President Trump reduced the cap on refugee admissions via executive order. In FY 2018, the president further reduced the refugee admission cap to 45,000, the lowest since the enactment of the Refugee Act of 1980. For 2019, the administration cut the number of admissions even more to 30,000. However, the cap represents the maximum number of refugees that may be resettled in a year and the Trump administration is unlikely to resettle anywhere close to 30,000 people in FY 2019. In FY2018, the administration failed  to keep pace with the 3,750 refugees who would need to be resettled each month to reach the annual ceiling, resettling a total of less than a half of the annual admission number
[The government cut the cap on refugee admissions to 18,000 for 2020 - we're headed in the wrong direction.]

Where do refugees resettling in the U.S. come from?

All around the world. The United States admits refugees from more than 60 countries all around the globe. In FY 2018, U.S. refugees came mainly from Democratic Republic of Congo, Burma, Ukraine and Bhutan.

The number of U.S. refugees from Syria and Iran dropped considerably in FY18 due to implementation of the latest version of the Trump administration’s travel ban, which prevents individuals from Iran, Libya, North Korea, Somalia, Sudan, Syria, Yemen and certain government officials from Venezuela from entering the U.S. Because the travel ban has been in effect since June 2018 after being blocked by courts for nine months, the two countries are no longer among the top 10 countries of origin for U.S. refugees.

Where do refugees resettle?

All across the United States. Refugees have been resettled in 49 U.S. states, with Texas, Washington and Ohio resettling the most refugees in FY 2018.

Source: Refugee Processing Center
The number of U.S. refugees from Syria and Iran dropped considerably in FY18 due to implementation of the latest version of the Trump administration’s travel ban, which prevents individuals from Iran, Libya, North Korea, Somalia, Sudan, Syria, Yemen and certain government officials from Venezuela from entering the U.S. Because the travel ban has been in effect since June 2018 after being blocked by courts for nine months, the two countries are no longer among the top 10 countries of origin for U.S. refugees.

Where do refugees resettle?
All across the United States. Refugees have been resettled in 49 U.S. states, with Texas, Washington and Ohio resettling the most refugees in FY 2018.

Who refers refugees to the U.S. for resettlement?
Primarily the United Nations High Commissioner for Refugees (UNHCR). UNHCR, the United Nations (UN) Refugee Agency, is an international agency dedicated to protecting forcibly displaced communities and stateless people. UNHCR screens applicants to determine whether they qualify as refugees and if they are in particular need of resettlement, and, if so, refers them to the U.S. and other countries. In some cases, for the U.S. refugee admissions program (USRAP), refugees are referred by a U.S. Embassy or a specially-trained nongovernmental organization; certain groups with family members in the U.S. or who served U.S. missions in Iraq also have application pathways.

How long does it take to screen and vet a refugee?
An average of nearly two years. While the total processing time varies depending on an applicant’s location as well as other circumstances and policy changes, the vetting time – from the refugee’s initial UNHCR referral to his or her arrival in the U.S. –has averaged approximately 18 to 24 months in recent years. Given recent developments, the length of the wait will likely increase.

To be admitted to the U.S., refugees go through several rounds of background checks, screenings and interviews under the United States Refugee Admissions Program (USRAP), including:

After an initial screening by UNHCR, the nine Resettlement Support Centers (RSCs) located around the world collect applicants’ biographic and other information.
After the State Department preliminarily approves an application to begin the resettlement process, they are reviewed by officers from U.S. Citizenship and Immigration Services (USCIS) in the Department of Homeland Security (DHS), as well as ongoing vetting by a variety of intelligence agencies (including the FBI, CIA, and others).
USCIS also conducts an in-person interview with each refugee applicant before deciding whether to approve him or her for resettlement in the U.S.
All USCIS-approved refugees then undergo health screening to prevent those with contagious diseases from entering the U.S.
Most refugees undergo also a cultural orientation course prior their arrival.
Before refugees arrive, it is established where in the United States they will initially live and which refugee resettlement agency will help orient them to life in the United States.
After arrival to the U.S., all refugees are checkedat the airport by a U.S. Customs and Border Protection (CBP) officer to ensure they are the same people that were screened and approved for admission.
What do refugee resettlement agencies do?
Assist refugees after their arrival in the U.S. After the final screenings by the U.S. government, the refugees are picked up at the airport by a representative of one of the nine domestic resettlement agencies, all of which have cooperative agreements with the U.S. Department of State.

After arrival, the resettlement agencies help refugees to start their lives in the U.S., assisting them with applying for a Social Security card, registering children in school, learning how to access shopping facilities, arranging medical appointments, and connecting them with needed social or language services.

How is the refugee resettlement funded?
Through the Department of State and the Department of Health and Human Services. The State Department’s Reception and Placement (R&P) program provides refugees with a loan to travel to the U.S., which they are required to start repaying after they arrive. The R&P program then supplies resettlement agencies a one-time sum per refugee to finance their first 30-90 days in the U.S. That money goes mostly towards rent, furnishings, food, and clothing, as well as costs of the agency staff case management and other integration services.

After three months, HHS’s Office of Refugee Resettlement (ORR) then works through the states and other nongovernmental organizations to provide refugees with limited cash and medical assistance, as well as short-term language, employment, and social services, and longer term integration services.

Can refugees legally work in the United States?
Yes. Upon arrival in the U.S., refugees receive employment authorization and are encouraged to become employed as soon as possible so that they can support themselves.

Can a refugee become a U.S. citizen?
Yes. All refugees are required to apply for a green card to become a permanent resident after one year in the United States. After five years of residency, they become eligible to apply for U.S. citizenship.

Another busy week in our NEW Paradise. Non-pictured activities:
On last Sunday we met with Bishop Desrosiers, his counselor, Taylor and Elder Sonnefeld. We discussed a plan to create a Swahili Branch in the next several months.

Met with Bishop Desrosiers and Kiza who will work with the Swahili Group Leader, Amos, to start the process of translating Handbook 2 into Swahili. Kiza speaks Swahili, French and English. (Amos speaks Swahili and French. I met with Amos a couple of days later at his house.) We are taking the French Handbook 2 and then also the Google Translate computer translated version of French to Swahili and the English version of the Handbook and trying to complete a Swahili version. Besides ending up with the Swahili translation, we will spend time teaching leadership principles, first to Kiza and Amos. Then we will expand our teaching to include other members who are growing in the gospel and being prepared to be future leaders in the Swahili Branch they are hoping to organize soon.

Missionary Coordination Meeting Wednesday night. Reviewed lots of things that are going on and how we can help.

Met with Igor Marques, the Ward Mission Leader, in his office to review Ward Members that we should reach out to – and he gave us a Ward List to help us know where everyone lives.

Met with David & Maria to help them find family names to take to the Temple. Maria was recently baptized.

On Friday we met with Amanda who hasn’t attended church in a while but has decided to be more involved. Amanda called the Sister Missionaries, but Amanda doesn’t live in their area. So, Elders McSpadden and McOmber asked us to visit with them. We also met with Amanda and two of her children on Saturday to teach them about the Restoration. And then they came to church on Sunday – it was awesome.

We cleaned the building again on Saturday – we gave rides so the Swahili members could come help too.

We visited several families this week: Didas & Regina, The Amuri Family, Amos & Fatuma, Maria’s son, Ney, Franco, Desire “Siden”’s brothers, Zachery & Stephanie and Iyana.  And we tried to find a bunch more, we’ll keep trying! (And of course we took lots of Karen’s yummy treats with us as we visited.)

We made 3 trips to the church giving rides. (That took about 1 ½ hours.)

Things are hopping in this part of the kingdom - we feel so blessed to be here! 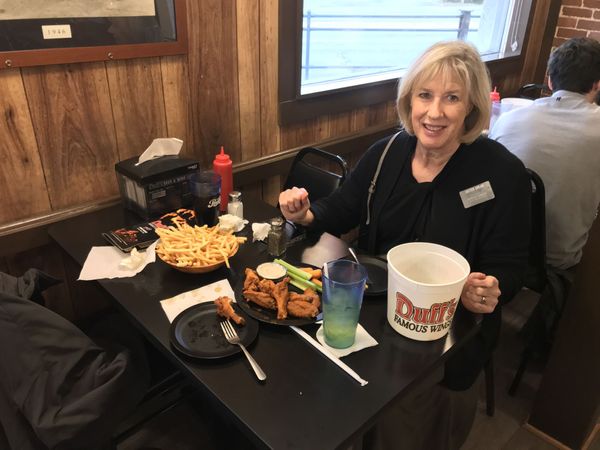 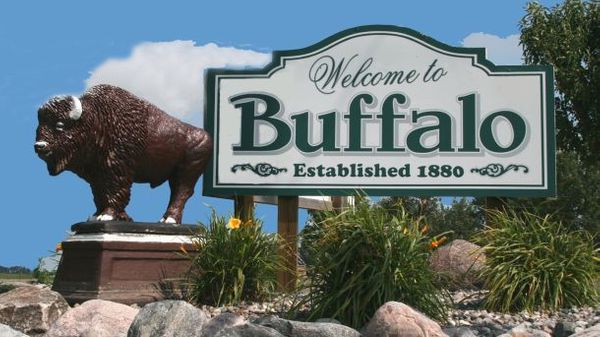 December 29, 2019 - We got transferred to Buffalo, NY!!! We left Massena & went to our daughter's house near Schenectady for Christmas and then we headed to Buffalo where we will be working with a group of Swahili speaking members who are refugees from mostly the Congo who have been resettled...