Everyone has been blessed with special talents. They are gifts from Heavenly Father and Jesus Christ. Sometimes you may think of music, art, or sports as the only talents that a person may have, but there are other talents that aren’t so obvious. You may be talented at being a good friend or being dependable. Perhaps it’s easy for you to fix things that are broken. Maybe you give good talks. Not everyone is given the same talents. Last Friday night, the Massena Branch members were able to share some of their special talents.

When We're Home Alone...hilarious parody on When There's Love at Home:

Broderick has been writing Poems since grade school:

Craig tickling the keys on the piano:

Maxwell jams on the sax:

Aaron shows off his skills on the violin:

Karen talks about Seaway - she is the queen of the ship chasers!

Carlena sings and signs a song:

Leah-Mae shows off her makeup skills with Elise as her model:

Everette dedicates his version of the Old Rugged Cross to his mom:

Sister Potts repeating all 50 states in alphabetic order in one breath! We dare you to try it:

Listen to John talk about his cooking talents:

Branch Leaders having fun at the beach:

While in Plattsburg, we had to drive by Lake Champlain which was about a mile away from the church. Karen has read about this area during the Revolutionary Ward and the War of 1812 and wanted to see the lake.
In early 1777, British General John Burgoyne led 8,000 troops from Canada, down Lake Champlain, and into the Champlain Valley. The goal of this invasion was to divide the New England colonies, thus forcing the Continental Army into a separated fight on multiple fronts. Lake Champlain provided Burgoyne with protected passage deep into the American colonies. Burgoyne’s army reached Fort Ticonderoga and Mount Independence in late June 1777. During the night of July 5, the American forces fled Ticonderoga as the British took control of the fort. However, Burgoyne’s southern campaign did not go uncontested.

On October 7, 1777, American General Horatio Gates, who occupied Bemis Heights, met Burgoyne’s army at the Second Battle of Freeman’s Farm. At Freeman’s Farm, Burgoyne’s army suffered its final defeat and ended their invasion south into the colonies. Ten days later, on October 17, 1777, British General Burgoyne surrendered his army at Saratoga. This defeat was instrumental to the momentum of the Revolutionary War, as the defeat of the British army along the Champlain-Hudson waterway convinced France to ally with the American army.

Another busy week in Paradise. Non-pictured activities:
Visit the Cardiologist - Not experiencing any problems, just trying stay on top of things.
2 Hospice visits
Help move a few things for Ellie who is being taught by the Sister Missionaries
Young Women’s - final preparation for Talent Show
Clean the church
District Council in Potsdam - reporting and training - lots of role playing
BYU PathwayConnect Preparation and Gathering
Mission-wide Conference call –Light the World - One by One - more on this next week!
Bible Study – Elijah - Old Testament Prophet
Missionary Correlation Meeting
Piano Lessons for two children in the branch
Dinner with Rita who is being taught by the Sisters
Handing out Talent Show Invitations (Texting, Calling and Facebook, too)
Shakes, Spoons Game - they even let me win once.
More boxes for Sister Webber who is moving this Saturday
Lots of visits and delivering of treats to members and friends of the church.
Dinner to Bro Keesling and the Vaisey's
Feed the missionaries - always one of the highlights of our week

November 17, 2019 - Happy Birthday Karen. Light the World is an invitation to touch hearts and change lives through simple acts of service. By thinking of someone we can serve each day, we can minister to the people around us like Jesus did - one by one. 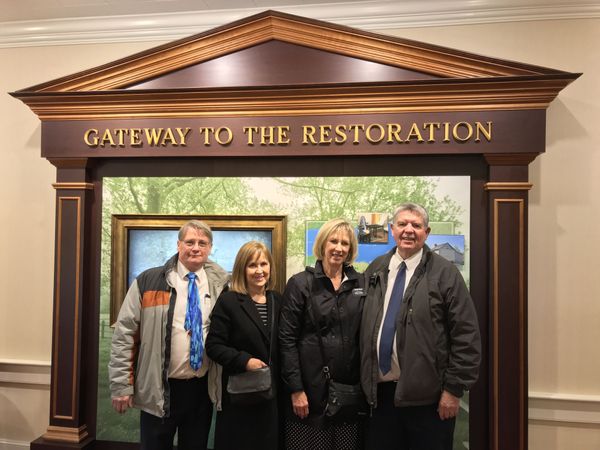 November 3, 2019 - Restoration: The re-establishment of the ancient church and gospel of Jesus Christ in the latter days as revealed by God through Joseph Smith and the prophets who have succeeded him as president of the Church....

Mark and Karen Spear's Mission Blog
—
When Talents are Shared, ALL are Blessed.
Share this